Dr. Alley, Ms. Herrmann and PEI members around the world will be discussing the science and communication behind ice sheets and sea level rise. Participants of all interest and knowledge levels are welcome to participate in the webinar and online discussion to gain valuable tools for sharing polar science with your audience. 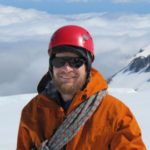 Dr. Richard Alley is an Evan Pugh Professor of Geosciences in Penn State's College of Earth and Mineral Sciences. His research interests focus on glaciology, sea level change and abrupt climate change, and he frequently discusses earth sciences on major media outlets, including NPR, BBC and PBS. He is widely credited with showing that the earth has experienced abrupt climate change in the past—and likely will again, based on his meticulous study of ice cores from Greenland and West Antarctica. Read More

Richard joined the faculty of Penn State in 1988 after graduating from the University of Wisconsin in 1987 and continuing his research for a short time there. In recent years, he served as one of the authors on the U.N. Intergovernmental Panel on Climate Change, whose members shared the 2007 Nobel Peace Prize with former Vice President Al Gore. He was elected to the National Academy of Sciences in 2008; awarded the prestigious Tyler Prize for Environmental Achievement in 2009; hosted a PBS special on climate change and sustainable energy titled "Earth: The Operators' Manual," authored a companion book of the same name, and received a Heinz Award for being a leader in climate and polar ice studies in 2011. Most recently, Richard was named one of the inaugural five recipients of the U.S. News & World Reports Science, Technology, Engineering and Mathematics (STEM) Leadership Hall of Fame awards.

Richard continues to give back to the science community, serving, and having served, on a variety of advisory panels and steering committees for targeted research activities, the National Science Foundation and professional societies including the congressionally mandated Antarctic External Review Panel and the Polar Research Board. He’s also provided advice to numerous U.S. government officials in multiple administrations including a vice president, the president's science advisor, and several committees and individual members of the U. S. Senate and House of Representatives. 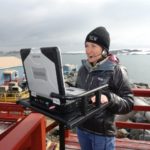 Nell Herrmann is a science educator with fourteen years of experience. She is currently teaching middle school science in Blue Hill, Maine and has taught middle school and high school in central Pennsylvania. Nell has worked as an onboard naturalist at two nonprofit organizations: the Marine Environmental Research Institute (MERI) and Heart of the Storm. Read More

In 2012, Nell traveled to Palmer Station Antarctica, as part of an NSF funded program called PolarTREC (Teachers and Researchers Exploring and Collaborating) where she participated in research about ocean acidification. In 2013, Nell completed a Research Experience for Teachers (RET) with the Palmer Station Antarctica Long Term Ecological Research (LTER) Education and Outreach Program. Nell has continued to pursue her interest in polar science and currently serves on the Executive Council of Polar Educators International and as a member of the steering committee for the Polar Center at Penn State University.

Nell has participated in conservation research at many organizations including the Rocky Mountain Biological Laboratory in Gothic, Colorado; the Hato Pinero Research Facility in Venezuela; Asociacion ANAI in Costa Rica; and the Kangerlussuaq International Science Station in Greenland.

Nell has recently been selected to serve as a Nautilus Explorer Science Communication Fellow. Dr. Robert Ballard, well known for his investigations of the Titanic shipwreck, runs the program. Nell will be working alongside marine archaeologists and marine biologists as part of the Fellowship. She will participate in research of the Mesoamerican Reef, which will be conducted using Remotely Operated Vehicles (ROV's), and will share the expedition experience with diverse and geographically dispersed audiences in 2014.

Nell's primary goal as a science educator is to convince her students that science is both exciting and accessible.